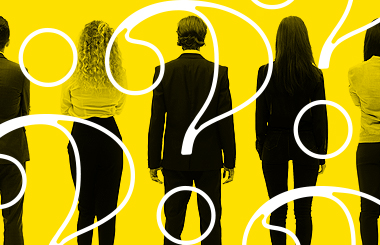 It was my very first agency gig.

Originally brought in as an account manager but later recruited by the creative team to “move over to the dark side” as a copywriter, I was young and full of hope and bursting with excitement to be part of the company.

Then one day a job folder landed on my desk. It was an internal campaign for my agency, and it wound up breaking my heart.

Well, okay, I’m being a smidge dramatic here. It didn’t break my heart, but it definitely broke my enthusiasm. And it taught me a lesson that I’ll never forget.

Don’t make anyone on your team feel non-essential.
This statement is a no-brainer. Of course as leaders we want everyone on our team to feel important. Logic reminds us that if a person weren’t essential, that person would no longer be employed. So why in the world would anyone need advice about how to avoid making your team feel unimportant?

Here’s the simple answer: Because most leaders don’t mean to make their team feel insignificant. It happens by accident. And the negative repercussions can be huge.

So what happened at your old agency?
Right, back to the story. So an internal job folder landed on my desk one afternoon. The owner of our agency wanted to go after new clients with a very strategic, multi-pronged direct mail campaign.

First we would send the potential client a gorgeous, custom chess board. Then a week later we’d mail out half of the chess pieces. And finally we’d complete the chess set and include in the package a leather binder chock full of information about our agency and why we would be incredible strategic partners.

I was fired up about the concept. My task was to write the notes that went along with each mailing. I had a blast figuring out the perfect words to describe each piece of the campaign. Oh, what fun!

Then I saw a copy of the three-ring binder that accompanied the final mailing. Inside were several tabs designed to organize the content. Most of the names on those tabs were what you’d expect: What we do, Our philosophy, Our clients, etc.

But there was one tab that really stood out to me.

The “Key Personnel” tab
I flipped straight to the Key Personnel tab to read the content. A whole page was dedicated to each team member featured in that section. And it wasn’t just a headshot of the employee. It was a professional, full-body image of that person, carefully and cleverly posed in an environment or activity that made sense for that person’s job at the company.

The photos were terrific. The bios were engaging. But there was only a handful of people featured in the Key Personnel tab.

I remember feeling my stomach drop. I was self-aware enough to understand why my bio didn’t appear in the Key Personnel section. Of course the most junior member of the copywriting team wouldn’t be highlighted in the client binder. But it sure made me feel, well, not-so-key.

And when the rest of my teammates found out that only a few folks in the company were in the key personnel section, they felt crummy, too.

So, as a writer and a deeply empathetic person who happened to have a light workload at that time, what did I do? I created my own set of bios for us disenfranchised team members who didn’t make it in the binder.

I should point out that while I’m a writer by trade, I’m also a pretty decent photographer. Plus, my best friend at the agency was a graphic designer. When writing jobs were slow, I’d lurk in her office, pull my chair up behind hers and watch her navigate the design programs. (She didn’t mind. We kept each other entertained.) After a few weeks of these casual design classes, I had become fairly adept at Photoshop.

So I scheduled time with each person who had been left out of the binder. I interviewed team members about who they were, where they came from and what they liked (and didn’t like) about their jobs. Together, we decided what that person would wear to the photo shoot, which I set up in the hallway near the elevators. And then I took each person’s photo (in costume!) and used my hack Photoshop skills to cut out the background and duplicate the format of the Key Personnel pages.

Only I called us the Not-So-Key Personnel.

The Not-So-Key Personnel tab
I had a blast writing the bios. I really got to know my teammates and what made them tick. I wrote tongue-in-cheek references to the things that stunk about our jobs. For instance, the receptionist dressed up like a genie because she was constantly changing travel plans at the whim of every executive in the company. I dressed up like Braveheart as I was in charge of fighting the good fight for the non-essential workers. My designer friend dressed up as a superhero with papercuts from the Exacto knife she used to create mock-ups. You get the idea.

When the bios were complete, I printed each one out and hung them up on a bulletin board in the main hallway of the agency. And then I held my breath. What would the boss man say?

My boss’s response bewildered me.
The Not-So-Key Personnel pages were on the bulletin board for several days before the big boss even saw them. He stood in front of the board and read each one. He was very quiet. Then his shoulders began moving up and down. It took me a second to realize he was LAUGHING.

I took a deep breath and walked up to him and asked him what he thought of the team bios. He looked right at me and said, “These are hilarious. I wish the real bios were this funny!” And then he walked back to his office.

I stood there, rooted in place. On one hand, I was glad he thought my work was funny. Because those bios were funny.

But on the other hand, he had completely missed the point.

Now I run an agency.
I wound up leaving that agency to start my own. For the last 19 years, I’ve been the boss, and it has been lots of fun on occasion but also ridiculously exhausting.

I can relate to my former boss in many ways. He had a lot going on—demanding clients, a company that was struggling, and a wife and young children to support. I also understand how taxing it is to bear the burden of constant decision making and problem solving. So I try not to wince when I think back on the Not-So-Key Personnel story.

But I never want a single person on my team to feel unimportant. Because I only hire ROCK STARS. Every single person I bring on offers such insane talent to our team. I couldn’t be prouder of them, and I want them to know it and to feel it. (Team Thinkwell, are you reading this blog post? If you ever feel underappreciated or unrecognized, please reach out immediately!)

Here’s one of the things we do at Thinkwell to demonstrate that every single person is incredibly important. If you go to our website, click on Team in the navigation bar. You’ll see the beautiful faces of every single person who calls Thinkwell their work home. Every. Single. One. And if you click on those faces you will read some of the most fascinating bios you’ve ever read on the World Wide Web. I promise.

Our bios don’t read like resumes. They tell intriguing stories about the people with whom I’m lucky enough to work. Here’s a sneak peek at what you’ll learn if you read up on our team:

Aren’t they amazing? Don’t you want to meet these people? That’s the point.

At the expense of sounding like a country song, my business would be nothing without these tremendously talented creative folks.

I bet your business would be nothing without your team, either.

We can help you honor your team.
If writing funny and insightful team stories isn’t your cup of tea, hire Thinkwell to interview your team and write their bios. We’ve done this sort of thing for loads of clients, and, hands down, it’s one of our favorite assignments.

This effort will honor your company’s most critical assets. Your website will become so much more interesting. Your team will discover zany facts about each other that they never knew before. You will all feel pride as you realize just how incredible your team really is.

And no one will feel non-essential.